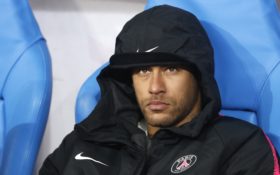 Neymar appeared to aim a punch at a fan goading him and other Paris Saint-Germain players with provocative language, following the club’s surprise French Cup final defeat to Rennes on Saturday.

The Brazil forward was walking up the stairs to collect his losers’ medal at Stade de France when he was involved in an altercation. Videos since shared online showed the fan mocking PSG players Gianluigi Buffon, Layvin Kurzawa and Marco Verratti as they walked past, filming them on his phone as he used provocative language about them.

When it came to Neymar’s turn, he stopped, looked at the man who was grinning at him, pushed his phone down and then flicked a quick jab with his right hand that caught the man around the chin area. The man stepped back but did not appear to be hurt.

Contacted by The Associated Press for a response, PSG said it stands by Neymar and PSG’s other players “100 percent” over the incident. The club also understands the man in question was the friend of a Rennes player, who has not been named.

Rennes won the Cup in a tense penalty shootout after fighting back from 2-0 down to force extra time. It was the club’s first trophy since winning the Cup in 1971 and prevented PSG winning it for a fifth straight season and a record extending 13th time overall.

Neymar had set up PSG’s first goal for countryman Dani Alves and scored the second midway through the first half.

Neymar’s temper got the better of him earlier this season after PSG lost to Manchester United in the Champions League.

Following the round-of-16 game in March, Neymar used Instagram to aim an expletive and insults at video review officials who intervened before Man United was awarded a stoppage-time penalty for a handball that eliminated PSG.

You can watch the video of the incident below: