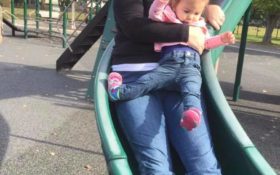 A disturbing photo of a New York mother holding her daughter as they go down a slide is being circulated as a major warning to parents and grandparents.

Heather Clare, of Long Island, was riding down a slide at the park with her 12-month-old twins when the absolute unthinkable happened.

Her daughter, Meadow, began sliding off her lap and her foot got stuck on their way down the plastic green slide… and bent in the complete opposite direction. And it’s an accident that happens more often than anyone knows.

Clare realized as they were riding down that Meadow’s foot got caught in a weird leaning position, and she tried to stop their sliding, but it was too late — Meadow’s leg was broken.

So every year I do a PSA on going down a slide with your child on your lap. When Meadow was 12 months old (I went down…

“This picture is the moment her leg was breaking. She’s still smiling… because it was happening at this exact moment,” Clare wrote on Facebook.

Clare quickly rushed her toddler to the emergency room after the accident and discovered that Meadow had fractured her tibia and fibula in her right leg.

“When we went to the ER, the super empathetic doctor lectured me on how common this injury is. I had no idea. I thought everyone took their kids down the slide,” Clare explained.

The doctor explained to Clare that there really is no safe way to take your child down the slide. Even if the kid’s feet are tucked, they can still get stuck. It’s safest to let them slide alone.

A 2017 study by American Academy of Pediatrics reports that over 350,00 children under the age of six were injured in slide accidents during 2002 to 2015.

Almost three years following the incident, Meadow has made a full recovery, but her mother still shares the post every year to remind parents and grandparents of the dangers of riding down a slide with their children.