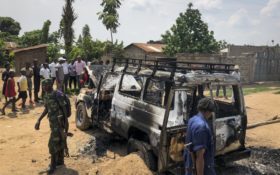 A driver working with an Ebola response team is in critical condition after angry crowds hurled rocks at him and set his vehicle on fire.

Monday’s attack in Beni is the latest against health workers trying to combat the virus that has killed more than 1,500 people in eastern Congo since the outbreak began last August.

Col. Safari Kazingufu told The Associated Press that authorities were working to find the attackers and to protect the health teams out in the field.

Ebola response efforts have been severely hindered by community mistrust and fear. Health centers have come under deadly attack and teams in the field have been threatened and injured.

As a result, Ebola has spread in areas where vaccination efforts have stopped because of the dangers.