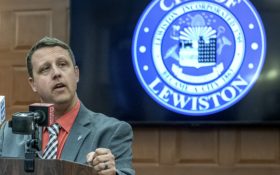 The mayor of Maine’s second-largest city resigned Friday in the wake of a controversy over his leaked text messages, one of which included a racist remark, and authorities confirmed he’s being investigated by the state attorney general’s office and the city police.

Republican Shane Bouchard stepped down as Lewiston’s mayor effective immediately. Text messages made public by a woman who said she had an affair with Bouchard when he was a mayoral candidate revealed a racist remark he sent her while the two were working to undermine a political opponent.

The woman, Heather Berube Everly, has said that she was the source of emails the Maine GOP used to attack Democratic opponent Ben Chin. A website created by Maine Republican Party leader Jason Savage published emails from Chin’s campaign, including one in which Chin said he’s run into “a bunch of racists.” Bouchard went on to defeat Chin in the December 2017 runoff.

The Sun Journal reported Everly has now made public more than 150 text exchanges with Bouchard. In one, Bouchard describes elderly black people as “antique farm equipment.”

Bouchard apologized after the texts became public. He said he says “stupid things and stupid jokes occasionally.” He then held a brief press conference on Friday in which he said he’s “not a perfect person” and blamed the news media in part for his troubles.

“It has become clear to me that the media does not acknowledge personal space and reports on nothing more than rumor in many cases. In this political climate where the media does not discriminate between fact and rumors, it is hard to be a public figure,” he said.

The investigation division of the Office of the Attorney General is working with the Lewiston Police Department on an investigation of the allegations against the now-former mayor, said Marc Malon, a spokesman for the office. He declined to comment further.

City Council President Kristen Cloutier will take over as mayor until the election in November. She also said she doesn’t plan to run for the office. Cloutier said she’d heard some of the rumors concerning Bouchard’s campaign.

“The campaign was fraught with those rumors. A lot of people had heard some of them,” she said.

Bouchard has described the allegations of his affair with Everly as a rumor that was dealt with months ago. Everly hasn’t responded to e-mails seeking comment.

The Lewiston Republican City Committee said in a statement Friday that it “offers its prayers to the mayor, his family, the Lewiston City Council, city officials, citizens and neighbors.”