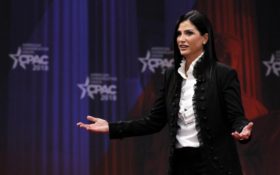 NRA spokeswoman Dana Loesch spoke at the forum and claims she would not have been able to exit without the help of her security detail.

During her speech at CPAC on Thursday afternoon Loesch announced that without her security personnel protecting her at last night’s town hall in Parkland, FL. students would have attacked her.

You can watch her full speech here —

“I wouldn’t be able to exit that if I didn’t have a private security detail. There were people rushing the stage and screaming burn her. And I came there to talk solutions and I still am going to continue that conversation on solutions as the NRA has been doing since before I was alive,” Loesch announced at CPAC.

Students attending the forum did not care that Loesch wanted to talk gun solutions, they were only interested in protest.

Isn’t it ironic that the same people calling for gun control are wanting to murder an innocent woman?

“I want to make this super obvious point,” Loesch said at CPAC. “The government has proven that they cannot keep you safe. And yet, some people want all of us to disarm. You heard that town hall last night. They cheered the confiscation of firearms. And it was over 5,000 people.”

“The government can’t keep you safe and some people want us to give up our firearms and rely solely upon the protection of the same government that’s already failed us numerous times to keep us safe. And then they also call Trump a tyrant but they say they want the president to also confiscate our firearms? Try to figure that one out,” Loesch said.

The hypocrisy in liberal arguments is evident — they want tougher gun laws and they want to be protected, but they fail to realize that the government alone cannot keep them safe.