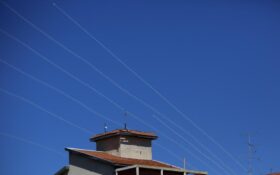 A shocking but brief phone call has emerged out of the Hamas-Israeli conflict — and critics say it’s the only thing you need to know about who the United States and its citizens should support in the fight.

The conversation starts as an Israeli Defense Forces (IDF) soldier calls to warn people inside a building in the Gaza Strip that their location is being targeted, and they must flee to avoid injury or death.

The building was being used by Hamas as a staging ground for military gear, the IDF claimed. Hamas is notorious for using civilians as human shields, so the IDF warns anyone nearby with phone calls and drones that a strike in incoming. The goal is to give enough time for people to get to safety… but not allow the radical Islamic terrorists to remove their equipment.

“I can’t get all of the people out,” the Palestinian says in the phone call. He demands the IDF give a huge amount of time. “I need at least two hours to get them out.”

“Listen: We are going to bomb the building,” warns the Israeli.

“You want to bomb? Bomb whatever you want,” the other man replies.

“No, brother, we need to do everything we can so you don’t die,” the IDF member says in response.

“We want to die!” the Palestinian insists.

“But you have a responsibility for children’s lives,” the IDF soldier pleads.

The Pelestinian man says that he’s willing to sacrifice the children in the building to make the Israeli military look bad.

“If the children need to die, then they’ll die,” he says.

“God forbid! God forbid, what do you want, to die?!” the IDF man asks.

“This is how we reveal your cruelty!” the Palestinian responds.

This is the entire conflict in a nutshell https://t.co/aIZV8ODcKO

Israeli Prime Minister Benjamin Netanyahu vowed Wednesday to press ahead with a fierce military offensive in the Gaza Strip, pushing back against calls from President Joe Biden to wind down the operation that has left hundreds dead.

Netanyahu’s tough comments marked the first public rift between the two close allies since the fighting began last week and could complicate international efforts to reach a cease-fire.

Israel continued to pound military targets in Gaza with precision airstrikes, while Palestinian militants bombarded Israeli civilian centers with rocket fire throughout the day. In another sign of potential escalation, radial Islamic terrorists in Lebanon also fired a rocket barrage into northern Israel.

After a visit to military headquarters, Netanyahu said he appreciated “the support of the American president,” but he said Israel would push ahead to return “calm and security” to Israeli citizens.

He said he was “determined to continue this operation until its aim is met.”

He spoke shortly after Biden told Netanyahu that he expected “a significant de-escalation today on the path to a cease-fire,” the White House said.

Biden had previously avoided pressing Israel more directly and publicly for a cease-fire with Gaza’s Hamas militant rulers. But pressure has been building for Biden to intervene more forcefully as other diplomatic efforts gather strength.

Egyptian negotiators have also been working to halt the fighting, and an Egyptian diplomat said top officials were waiting for Israel’s response to a cease-fire offer. The diplomat spoke on condition of anonymity in line with regulations. Meanwhile, German Foreign Minister Heiko Maas said he would fly to the region Thursday for talks with Israelis and Palestinians.

Israel’s Foreign Ministry said the foreign ministers of Slovakia and the Czech Republic would also arrive in Israel Thursday, and that the diplomats were invited by Foreign Minister Gabi Ashkenazi “to express their solidarity and support” for Israel.

Earlier in the day, the Israeli military said it was widening its strikes on militant targets in southern Gaza to blunt continuing rocket fire from Hamas. At least nine people were killed Wednesday in the Gaza Strip.

The current round of fighting between Israel and Hamas began May 10, when the militant group fired long-range rockets toward Jerusalem after days of clashes between Palestinian protesters and Israeli police at the Al-Aqsa Mosque compound, a flashpoint site sacred to Jews and Muslims.

Since then, Israel has responded with military airstrikes that it says have targeted Hamas’ infrastructure, and Hamas and other militant groups embedded in residential areas have fired more than 3,700 rockets at Israeli cities and population centers.

At least 227 Palestinians have been killed, including 64 children and 38 women, with 1,620 people wounded, according to the Gaza Health Ministry, which does not break the numbers down into fighters and civilians. Hamas and Islamic Jihad say at least 20 of their fighters have been killed, while Israel says the number is at least 130. Some 58,000 Palestinians have fled their homes.

Eleven civilians in Israel, including a 5-year-old boy, a 16-year-old girl, have been killed. One IDF soldier lost their life in the fighting.

The rockets fired by militants in Lebanon into northern Israel threatened to open up a new front in the fighting. The rocket attack, which drew Israeli artillery fire in response but did not cause any injuries, raised the possibility of dragging Israel into renewed conflict with the powerful Lebanese militant group Hezbollah to its north.

No one immediately claimed responsibility for the attack, and Hezbollah, which fought a monthlong war against Israel in 2006 and is largely funded by Iran, has stayed out of the fighting for now. The rockets were widely believed to be fired by Palestinian factions based in south Lebanon.

But they cannot operate without Hezbollah’s tacit consent, and the barrage appears to be carefully calibrated to send a political message that the group, which has tens of thousands of missiles, could launch a surprise attack at any time. Israel considers Hezbollah to be its most formidable threat and has threatened widespread destruction in Lebanon if war were to erupt.

The fighting, the worst since a 2014 war between Israel and Hamas, has ignited protests around the world. Israel captured the West Bank, east Jerusalem, and Gaza in the 1967 Mideast war, territories the Palestinians want for their future state.