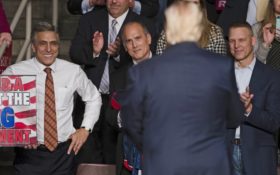 Just two months after winning his reelection to the House of Representatives, a longtime political ally of President Donald Trump suddenly announced late last week that he was resigning.

The Pennsylvania Republican lawmaker announced Thursday that he’d accepted a job in the private sector.

The conservative lawmaker will be especially missed by the Trump administration. He was considered a valuable and reliable ally of the president’s inside the Democrat-controlled House.

Marino was one of the key factors in Trump‘s surprise presidential campaign victory in Pennsylvania in 2016. Thanks in part to Marino’s help, Trump was able to upset former Secretary of State Hillary Clinton in the key swing state and won the 20 electoral votes. Trump nicknamed Marino and former Rep. Lou Barletta his “thunder and lightning” in the Keystone State.

Marino was Trump’s nominee for drug czar in 2017, but later withdrew his nomination due to criticism over his connections to pharmaceutical companies.

“Having spent over two decades serving the public, I have chosen to take a position in the private sector where I can use both my legal and business experience to create jobs around the nation,” Marino told voters in a statement Thursday.

“I want to thank the people of the 12th Congressional District of Pennsylvania for the faith they have placed in me to represent them in Congress,” the statement said. “It truly has been one of the greatest honors of my life.”

Marino won 66 percent of the vote in his district in his November reelection campaign, and had just been sworn in to his fifth term in Congress.

A special election will be called to replace Marino’s seat for Pennslyvania’s 12th Distrcit, which will draw national attention — and a serious Democratic challenge to the traditionally red area.

“Marino’s resignation will prompt a special election, in which each party’s nominee will be selected by local party leaders at a nominating conference,” according to Roll Call.

“Democratic Gov. Tom Wolf must issue a writ of election within 10 days of Marino stepping down,” Roll Call continued. “The special election must take place no fewer than 60 days after Wolf issues the proclamation. There is a state Senate special election scheduled for April 2, so the governor could choose that date to consolidate the costs.”