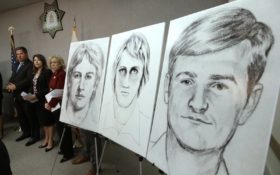 Authorities in California plan to make a “major announcement” in the case of an elusive serial killer they say committed at least 12 homicides, 45 rapes and dozens of burglaries across the state in the 1970s and 1980s.

According to NBC News,  “A 72-year-old ex-police officer named Joseph James DeAngelo, who appears to fit the description of the elusive California killer, was arrested overnight on two murder charges by police in Sacramento.”

A news conference will be held Wednesday afternoon in Sacramento to make “a major announcement,” said District Attorney’s spokeswoman Shelly Osorio. She offered no other information.

A woman who was sexually assaulted in California in 1976 by a man believed to be the East Area Rapist and who now lives in South Carolina told The Island Packet newspaper Wednesday that she has been contacted by detectives about an arrest.

FBI and California officials in 2016 renewed their search for the suspect dubbed the East Area Rapist and announced a $50,000 reward for his arrest and conviction. He’s linked to more than 175 crimes in all between 1976 and 1986.

As he committed crimes across the state, authorities called him by different names. He was dubbed the East Area Rapist after his start in Northern California, the Original Night Stalker after a series of Southern California slayings, and the Diamond Knot Killer for using the elaborate tie to bind two of his victims.

Most recently called the Golden State Killer, the suspect has been linked through DNA and other evidence to scores of crimes.

Authorities decided to again publicize the case in 2016 in advance of the 40th anniversary of his first known assault in Sacramento County.

Armed with a gun, the masked rapist would break into homes while single women or couples were sleeping. He would tie up the man and pile dishes on his back, then rape the woman while threatening to kill them both if the dishes tumbled.

He often took souvenirs, notably coins and jewelry, from his victims, who ranged in age from 13 to 41.