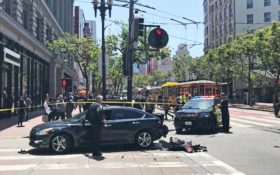 A stolen sport utility vehicle struck two pedestrians and injured five other people Wednesday afternoon as it drove on a San Francisco sidewalk and smashed into other cars while fleeing police, authorities said.

A person struck in a crosswalk was treated for life-threatening injuries and was listed in stable condition, KPIX-TV reported.

Another pedestrian and five drivers — including the woman behind the wheel of the SUV — had non-life threatening injuries, police said.

The car took off in a neighborhood after an officer checked the license plate of a silver Kia in an intersection and found it was stolen, a police statement said.

The car then stopped in front of a nearby police station, authorities said.

Surveillance video showed the car running up on a sidewalk, hitting a building, and injuring a construction worker near some scaffolding as more than a dozen police swarmed it. The SUV then backed up and went forward several times, hitting a tree and several cars, including an unmarked police car, before managing to drive off.

The SUV then hit a person in a crosswalk and four other cars before finally stopping in another neighborhood, police said.

One car was struck as the stolen SUV plowed the wrong way down a street. Two were struck near where Lauren Sorensen, 43, was about to cross the street.

“We were all about to cross,” she told the San Francisco Chronicle . “The crowd of people waiting was two to three people deep. We’re so lucky.”

“This is a very densely populated area. It’s very scary what I saw,” police Sgt. Michael Andraychak told the Chronicle about the video. “It’s very, very dangerous what this person was doing … and right at about 2 o’ clock, just as schools are letting out.”