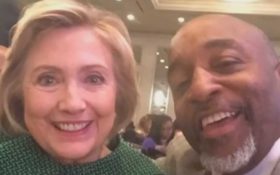 Ironically the next day, Glasgow was charged with capital murder in a shooting that killed one woman.

In Alabama, a person aiding or abetting a criminal act is equally liable. Glasglow has challenged his charges in court

Sharpton’s brother claims he’s not responsible for what his passenger did after he drove the man around.

The Dothan Eagle reports that Glasgow repeatedly asked District Judge Benjamin Lewis on Tuesday why he could be put to death for “what someone else does.”

“I don’t know why I am facing capital murder charges,” Glasgow stated. “I’m not responsible for what someone else does. He just asked me for a ride to take him to look for his car.”

Lewis told Glasgow he needed to stop making comments until he could speak with his attorney.

Glasgow inquired about bail, but Lewis said his current charge isn’t eligible for bail. A preliminary hearing will be held April 6 to determine whether a judge finds enough evidence to send the charge to a grand jury for possible indictment. Lewis told Glasgow he could be eligible for bail if the capital murder charge was changed to a lesser charge at the preliminary hearing.

Glasgow founded a homeless ministry in Dothan and has worked to restore voting rights to ex-convicts after serving time for a drug conviction.