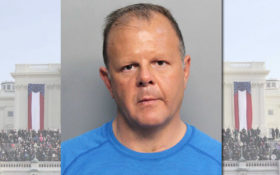 A Florida man with close family ties to Hillary and Bill Clinton is under arrest after posting an alarming video on his Twitter account threatening to kill President-elect Donald Trump.

The story behind this would-be assassination plot is unsettling.

Dominic Puopolo Jr., 51, was arrested in Miami after he posted a disturbing online video where he vowed to kill Trump at the inauguration, and challenged the FBI and Secret Service to stop him.

Puopolo’s video threat said he would “be at the review / inauguration and I will kill President Trump… President-elect Trump” while in Washington, D.C.

Miami police arrested him for threats against a public official later that day.

What has raised eyebrows about Puopolo’s twisted threat, however, is his strangely close connection to the Clinton family.

Public records show that Puopolo is no stranger to the Democratic Party, and specifically the Clintons. Failed Democratic presidential candidate Hillary Clinton delivered the eulogy at the funeral of his mother, where she personally referenced Dominic, Jr. in her remarks as a “computer wizard.” Puopolo’s mother, Sonia, died in one of the jets that crashed into the Twin Towers in Sep. 11, 2001 terror attacks.

Puopolo has also posted numerous pictures to social media of himself with Secretary of State John Kerry, whom he refers to him as a friend. And according to The Daily Mail, he has a donated tens of thousands of dollars to various DNC political campaigns throughout the past few decades.

Clearly mentally ill, Puoplo’s Twitter feed is filled with strange rants and messages about “coded messages” found in popular Netflix television shows. He commonly refers to himself as Jesus Christ, and claims to have been an expert witness in terror trials in German federal courts for five years.

Raised by well-connected parents, Puopolo is familiar to political insiders and also appears to be quite wealthy. After being arrested for petty crimes around Miami four times in the past ten years, The Daily Mail reported Wednesday that, “When he was arrested in March, the judge ordered Puopolo to be represented by a tax-funded public defender after declaring him ‘indigent.’ Property records, however, indicate Puopolo sold a family home in Dover, Mass. in 2013 for $4 million. And in 2004, he sold a condo in downtown Miami for $3.3 million.”

The Miami police report says he was arrested Monday at a nearby Subway restaurant and admitted to officers he had posted the threatening video. Police say Puopolo told them he is homeless, but conflicting reports have emerged that he actually lives in a $60,000 apartment in Miami.

His family has yet to comment on the arrest.