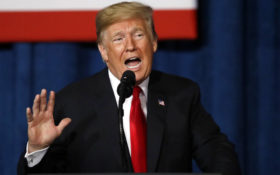 One of the leaders of the Never Trump movement – who has spent years accusing the president of being a Russian puppet – has registered as an agent to lobby the U.S. government on behalf of… Russia.

That’s not all – the GOP insider wants to make sure President Donald Trump doesn’t cut off Russia’s nuclear program!

He headed up the Republican faction of the “Russian collusion” brigades…until the Kremlin paid him to switch sides.

Earlier this month, Politico reported that Weaver quietly accepted a contract paying $350,000 for just six months’ work – lobbying the U.S. government to make sure it keeps selling uranium to Moscow.

The cash—or rubles—came from Tenam Corporation, the U.S. subsidiary of Rosatom, a nuclear energy company that is owned by the Russian government.

According to official documents outlining his role, Weaver would lobby against U.S. “sanctions or other restrictions in the area of atomic (nuclear) energy, trade or cooperation involving in any way the Russian Federation.”

His first order of business would be quashing a bill introduced by Trump ally Lindsey Graham to limit uranium sales to Russia.

Why did the anti-Russian fanatic suddenly change his mind?

Weaver said that after Russia offered him a third-of-a-million dollars, he “researched the issue” and learned that building the Kremlin’s nuclear arsenal “is in line with US national security interests.”

In a series of tweets, Weaver defended his lobbying on behalf of a foreign power, saying it was nothing like Trump’s alleged collusion with Russia. “We can’t paint everything with the same brush,” Weaver said.

Bear with me please. No one understands better than I twitter world is one devoid of patience or nuance. Many of you are upset (understatement) that I registered for an American subsidiary of a Russian company owned by the Russian government (I think I got that right)

This is definitely a switch for the longtime RINO campaign operative, who advised Kasich to attack Donald Trump for unproven ties to Russia.

Kasich told CNN in 2015, “Frankly, it’s time that we punched the Russians in the nose.”

Kasich attacked Trump for being too friendly with Vladimir Putin during a joint press conference last summer.

Kasich responded to one of Donald Trump’s tweets with a picture of Putin laughing.

Weaver orchestrated all this – and he collected about $700,000 in campaign donations from George Soros’ employees during the 2016 election.

When conservatives — a group Weaver has tried to drive out of the Republican Party for decades — found out Weaver was on the Kremlin’s payroll, they were outraged.

“You have got to be kidding me,” said Sean Davis, a co-founder of The Federalist. “This pathetic hack spent the last two years accusing everyone to his right of being a secret Russian agent, and now he’s the one getting paid by corrupt Russians?”

Weaver got so much static for his hypocrisy that he announced that he had backed out of the deal the next day.

“No funds were transferred, no actions taken,” Weaver claimed.

Even after taking money to build another country’s nukes, Weaver said the country’s biggest danger is Donald Trump.

“Nothing is more vital to America and the world than dispatching Donald Trump and his low travelers” from the White House, Weaver tweeted. So, he’s locked a “laser focus” on “ensuring Trump serves only 1 term.”

Weaver apologized for being a “distraction” to the Deep State’s dump-Trump efforts and said he was going to “get back to the barricades.”

Nothing is more vital to America & the world than dispatching @realDonaldTrump & his low travelers from the WH. While I fear the dangers of nuclear proliferation & know a stable uranium market is important to the USA's national & economic security — & experts urged this —

Even though his candidates lose every time, Weaver is still one of the most sought-after—and highly paid—consultants in D.C.’s consultant class.

Weaver is still the top advisor to John Kasich and told the media in February that Kasich is considering challenging Trump in the 2020 primaries. Kasich is still deciding whether to join former Massachusetts governor William Weld as a Trump challenger this year.

Neither man has any national popular following, and Trump would crush Kasich in his home state—so it pays Weaver to have big-dollar contracts like Tenam’s in his hip pocket when they flame out.

This news has got to bring a smile to President Trump’s face. Not only did the Mueller report exonerate him from two years’ of charges that he is controlled by the KGB, but now the most outspoken Never Trumpers have come out as Russian agents.

Trump has to keep up the pressure to drain the Swamp—and drive real foreign lobbyists out of the U.S. government for good.