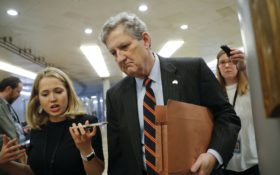 The announcement, made in a press release, came as a surprise.

The senator would have been a formidable opponent as Republicans try to unseat the Deep South’s only Democratic governor. Kennedy has long eyed the governor’s seat, and suggestions that he’d challenge Edwards began nearly as soon as he won his Senate race two years ago. He matches Edwards in popularity, and his fundraising skills are prodigious.

But Kennedy, 67, has quickly raised his profile in Washington, giving him more of a footing in Congress than would have been expected. And Edwards also is popular: A recent poll showed both men with approval ratings around 60 percent.

“I love being in the United States Senate. I will not be a candidate for governor in 2019,” Kennedy’s statement says. “I will, however, continue to work hard every day in D.C. and Louisiana for jobs, economic growth, cheaper health insurance, a stronger military and an end to government waste.”

“We’re glad Sen. Kennedy is going to continue representing Louisiana in the Senate and keep on helping President Trump make America great again. We need him there,” Rispone said. “It’s time to unite the party around electing a conservative Republican.”

Other potential GOP contenders include U.S. Rep. Ralph Abraham, who said he’s leaning toward running and will have a decision “very soon,” and state Sen. Sharon Hewitt.

But none have Kennedy’s statewide name recognition, and all but Rispone will have to fundraise from scratch for an election only 10 months away.

Kennedy has managed to attract national attention quickly in Washington, even as he clashed with Edwards over the governor’s tax packages, spending plans and criminal sentencing-law changes.

“I hope someone runs for governor who understands that Louisiana state government does not have to be a big, slow, dumb, wasteful, sometimes corrupt, spend-money-like-it-was-ditchwater, anti-taxpayer, top down institution,” he said.

Kennedy has become a favorite interview on Capitol Hill because of his outspoken, folksy responses and his quickness with a quotable sound bite. He’s mostly provided a safe Senate vote for Republicans, and he’s been a strong supporter of President Donald Trump.

Baton Rouge-based pollster Bernie Pinsonat thinks Kennedy decided to stay in Washington because he’s risen to prominence there, even as his popularity has grown back home.

“He’s become a national figure because of his quips and his quotes and his analysis,” Pinsonat said. “I think he ended up thinking governor would be a step down for him. He’s got the best job in the world.”