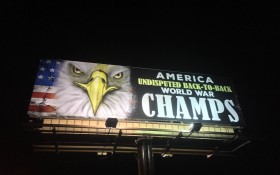 The owner of a Utah health and beauty business says a billboard company has refused to display their advertising featuring a man in an unbuttoned shirt.

The company Super Seed said they were told the images were inappropriate for the large digital billboard at a mall in Orem, the Daily Herald newspaper reported.

Owner Cesar Valentino Valdiza posed for the proposed billboard pictures reclining on a beach in jeans and an unbuttoned white shirt. He says the refusal to accept the advertising is sexist, since there are photos from lingerie company Victoria’s Secret at University Place Mall.

The parent company, Woodbury Corp., said that lingerie advertising is inside the mall rather than featured prominently on the side of an office building, according to emails reviewed by the newspaper.

The billboard company, Compass Outdoor Advertising, said in a statement that the digital billboard is only available to businesses located in the mall and Super Seed does not have a mall location.

Valdizan said Super Seed had been finalizing a lease would have made the company a mall tenant when the advertising decision was made.