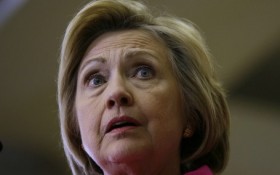 Former presidential candidate Hillary Clinton has lied and thrown up roadblocks ever since it was discovered that she used an unsecured, private email server while Secretary of State.

She promised that she didn’t mishandle classified information… and that she wasn’t using the U.S. State Department as a “pay to play” enterprise to benefit the Clinton family.

Still, as many as 33,000 emails suspiciously were deleted and went missing.

A former top Federal Bureau of Investigation official has just admitted that an enormous trove of Clinton emails was discovered.

And you’ll never believe where they were found.

As part of a lawsuit brought by government watchdog Judicial Watch, former Assistant Director of FBI Counterintelligence E.W. “Bill” Priestap admitted the agency uncovered Clinton emails that had not previously been publicly disclosed.

The Clinton emails were discovered by the FBI in the Barack Obama White House, specifically in the Executive Office of the President. And the FBI reviewed nearly 49,000 emails from the Clinton server on the laptop of disgraced former Congressman Anthony Weiner.

“This astonishing confirmation, made under oath by the FBI, shows that the Obama FBI had to go to President Obama’s White House office to find emails that Hillary Clinton tried to destroy or hide from the American people,” said Judicial Watch President Tom Fitton. “No wonder Hillary Clinton has thus far skated – Barack Obama is implicated in her email scheme.”

Former FBI Director James Comey was presumably aware of the emails as well, but has remained mum.

Clinton, Obama, Comey, and Weiner all getting caught up in the same scandal… how’s that for poetic justice?

And it doesn’t look like Priestap was too excited about divulging the information. His answers to Judicial Watch’s questions on the Clinton emails were described as “combative” at times.

It is reasonable to expect that saved email communications between Obama and Clinton may have been sensitive in nature. And these emails could add fuel to the notion that Clinton mishandled classified information.

More details about the Clinton emails are expected as the Judicial Watch case rolls forward — and the discovery of the emails could trigger new federal investigations.

We’ll be keeping you posted of the latest developments — even if the mainstream media keeps ignoring the story.