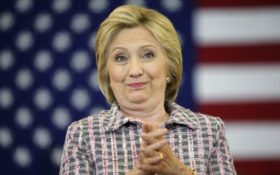 Former Secretary of State Hillary Clinton has just made her latest desperate attempt to stay alive in the 2020 presidential race – this time, she’s buying her way into it.

Hillary lost the 2008 Democrat primaries and got her clock cleaned by President Donald Trump in the 2016 presidential election. But she’s a Clinton, so she’s not going anywhere.

Instead, she’s digging her manicure deep into the 2018 midterms, paying off more than a dozen Democrats seeking office this November.

Onward Together, Clinton’s dark-money “resistance” group, has given the maximum $5,000 donation to 23 different aspiring Democrat politicians – but they should know, Clinton money doesn’t come free.

If they win, the Democrats she endorsed will be powerful local leaders: 19 are running for the House of Representatives and four are running for statewide office – but more about them in a minute.

The candidates Hillary funded are:

But make no mistake – Hillary isn’t helping the Democratic Party…she’s helping herself.

Hillary is only willing to part with her precious, precious money because she thinks it will bring her something she wants even more than cash: power.

“Onward Together, formed in May 2017, is a Clinton 2020 campaign vehicle in waiting,” wrote New York Post columnist Michael Goodwin.

The candidates Onward Together has funded are spread out for Hillary’s maximum political gain – in delegate-rich California for the primary, and states like Pennsylvania, Ohio and Nevada that are important for the general election.

Once they’re in office, they can pull strings to make sure Hillary has the most support they can offer – and she’ll need it, since most Democrats wish she would just leave their party alone.

Hillary’s list shows that she’s so confident – or delusional – that she’s looking beyond the primaries to her rematch against Donald Trump in 2020.

A few of the candidates are in toss-up states and in states Democrats want to flip blue: Virginia, Georgia… and even Texas.

But there’s something else about her list of candidates that’s not just desperate but downright chilling: She wants to control the people who run America’s elections.

Those four state candidates she endorsed are all running for the same office… Secretary of State.

At the state level, that office doesn’t have anything to do with foreign affairs. Those are the offices that determine election procedures – like election security, whether the state uses electronic voting machines or paper ballots, etc.

And the four states Hillary targeted are huge: Iowa, Michigan, Nevada, and Ohio.

Having someone in that office who owes you a favor could be a huge boon… the difference between winning and losing.

It also might win her support from another important person: billionaire George Soros. In 2006, Soros funded his own “Secretary of State Project” to elect the top election official in each state and has harped on the importance of the office ever since.

Hillary is playing ball, hoping that a little bit of her money might win her a big chunk of his billions when she throws her hat in the ring.