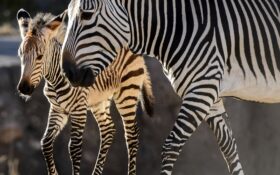 Law enforcement officials helped capture a loose zebra in middle Tennessee after it escaped from an exotic livestock auction.

The zebra ran onto Highway 111, but was not hurt due to the lack of traffic. Multiple methods were used to attempt to regain control of the animal. At one point, two police officers made “unsuccessful attempts” to deploy stun guns to redirect or capture the animal.

It took nearly three hours to corner and direct the zebra onto a transport trailer.

A nearby elementary school alerted parents in a Facebook post that “There is a zebra on the loose in the Prescott area. It escaped a truck, was tased, and is mad. Do not approach. (Yes, really.)”

Prescott South Middle School teacher Ashley Danielle Francis told WSMV-TV that she noticed the zebra while driving to work, calling it the “craziest thing I ever think I’ve ever seen in this town.