Sheriff under fire after punching woman in head - The Horn News 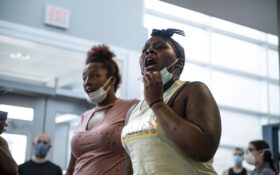 A Michigan sheriff’s deputy is seen on video punching a black woman in the head several times during her arrest early Tuesday, and another deputy tased her husband after the couple allegedly refused an order to leave the scene of a shooting.

Washtenaw County Sheriff Jerry Clayton said several officers involved in the incident have been placed on administrative leave, including the one seen on the video punching the woman, and an internal investigation is underway.

“There is absolutely no doubt, and no argument from me, that the images in the video are disturbing,” Clayton said. “It warrants a complete investigation.”

About three dozen demonstrators marched outside the sheriff’s department headquarters, chanting such things as “no justice, no peace” following the incident in Ypsilanti Township, about 40 miles west of Detroit.

Authorities said the deputies took the action against Sha’Teina Grady El and her husband, Dan Grady El, after they ignored an order to leave the scene of a shooting as officers formed a perimeter to keep community members away from a potential shooter.

“We cannot continue to allow this,” said Trische’ Duckworth, a protest organizer with the nonprofit Survivors Speak.

The protesters later met with Clayton in his office.

The sheriff’s department was called to scene on reports 30 people were arguing and shots had been fired. Upon arrival, the responding deputies found a 34-year-old female gunshot victim who required medical attention and several bystanders observing the scene, prompting a call to other police agencies for assistance.

In his statement, Clayton said his office is investigating the use of force against the Grady Els and their arrests. He says the sheriff’s department is committed to sharing all the facts in the case with the public as it becomes available.