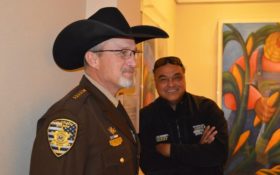 A southeastern New Mexico sheriff is vowing to go to jail and risk his seat rather than enforce a proposed red-flag gun law.

The Hobbs News-Sun reports Lea County Sheriff Corey Helton told an audience at a Eunice City Hall meeting on Monday he’s ready to go to jail, if necessary, for refusal to enforce the law he says is unconstitutional.

Helton said he’d be a one-term sheriff because a judge would place him under arrest. But he said he’d be able to sleep at night for standing his ground.

The bill pushed forward Tuesday in a Democratic-controlled House committee would allow law enforcement to petition a court for the temporary surrender of guns by people who appear to pose a danger to themselves or others.

Helton believes the law would be unconstitutional, violating both the Second and 14th Amendments.