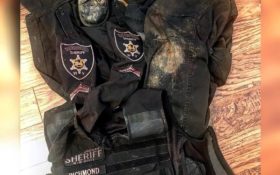 Brooke County Sheriff’s Deputy Kristen Richmond arrived at Bethany College early on Friday morning to respond to a call of a man that was throwing objects out of his third floor dorm room.

She was in for the surprise of her life when 21-year-old Brandon Jackson was “gooned up on an unknown drug” and engaged in altercation for “about five minutes” with Richmond.

The sheriff’s deputy wrote about her harrowing fight on Facebook and stated that Jackson “wasn’t there. The drug had consumed every part of him.”

“During said altercation, my glasses were shattered and knocked off my face, none of my radio transmissions got out, and a ton of equipment was stripped from my vest and duty belt. I managed to stay in the fight and maintain some control despite exchanging punches and knees with the subject,” she wrote on Facebook.

This will probably be one of the rawest posts I’ll write. It’s not for glory or any of that shit. I debated posting…

Richmond was able to secure one of Jackson’s hands into a handcuff, an released her K9 partner on him, but through all of the bites and punches, nothing deterred Jackson.

Richmond credits her extensive training with helping her through this scary situation.

She explained that Jackson even attempted to reach for her duty weapon, and she did not reach the point of using deadly force because of training.

“I’ve been beat to hell and back in training so I knew how to react and fight through being repeatedly being struck in the face and head. I didn’t freak out … I knew I was okay and still in the fight,” she wrote.

Following the incident, Jackson was transferred to a local facility, and it was not made immediately clear whether charges were filed.

As for Richmond, she came home with “a broken nose, a fractured sinus, and some other minor bumps and lacerations to my hands, face, and head.”

“First and foremost, I implore you to train!” she wrote on Facebook.

Secondly, she wrote “bond with your partners.”

And lastly, she wanted to educate the public to “Please take a few moments to consider everything that we go through before jumping to conclusions based off slanted media and facts. At the end of the day, we are exactly like all of you “normal” people. We just want to go home after work.”

Everyday, our police officers are faced with situations that we could not even imagine encountering.

Take a second to thank your local officers for always putting their lives at risk for the sake of ours.