Shep Smith's next job will BLOW MINDS - The Horn News 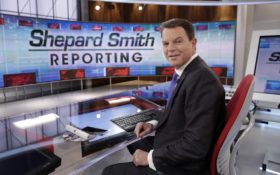 Shepard Smith, whose newscast on Fox News Channel seemed increasingly an outlier on a network dominated by supporters of President Donald Trump, abruptly quit after signing off his final newscast two weeks ago.

Smith, who had signed a contract extension last spring, asked Fox News to let him out of his deal and it had agreed on Oct 11.

“Even in our currently polarized nation, it’s my hope that the facts will win the day, that the truth will always matter, that journalism and journalists will thrive,” he said.

Neil Cavuto, who anchors the broadcast following Smith’s, looked shocked after his colleague made the announcement to leave Fox News.

Smith was one of Fox News Channel’s original hires in 1996, and was a particular favorite of Roger Ailes, the former Fox chairman who was ousted in 2016 following misconduct charges and died the following spring. He often angered many of Fox’s conservative viewers, but Smith’s more liberal leanings were most prominently cited by the network when it received criticism for being too partisan.

A month ago, Smith clashed with Tucker Carlson. It started when Napolitano, speaking on Smith’s program, said that it was a crime for Trump to solicit aid for his campaign from a foreign government, in this case Ukraine.

Later that night, Carlson asked his own analyst, Joseph diGenova, about that and he called Napolitano a fool.

The next day, Smith said that “attacking our colleague who is here to offer legal assessments, on our air, in our work home, is repugnant.”

Now he’s being recruited by the most liberal cable news network on television.

CNN president Jeff Zucker said Thursday at the network’s Citizen Conference in New York that he was interested in hiring Smith.

“I think Shep’s a great journalist,” Zucker said during an on-stage interview. “When he’s available, he is somebody who is very talented, and I would be very open to talking to him.”

Does Shep Smith belong at CNN?

Would you watch CNN is Shep Smith was featured?