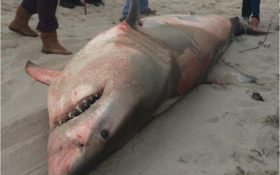 A Louisiana State University museum official has received a unique retirement gift — researchers in Alabama and South Carolina named a prehistoric shark species after her.

Suyin Ting has been collections manager for vertebrate paleontology at the LSU Museum of Natural Science for 26 years. Her new namesake is Carcharhinus tingae, which lived 40 million years ago and was identified from fossilized teeth in the museum’s collection.

“I am very honored to be recognized by my peers for my work,” Ting, who studied mammal paleontology, said in a news release Thursday, the day she retired.

But, she added, the fact that David Cicimurri of the South Carolina State Museum in Columbia, and Jun Ebersole of the McWane Science Center in Birmingham, Alabama, also identified many other specimens for the museum is much more important. Their contribution to the vertebrate paleontology collection is huge, she said.

Cicimurri, curator of natural history at the South Carolina museum, and Ebersole, director of collections at McWane, spent two days at the museum in 2020, photographing specimens and gathering data. The museum doesn’t have a fossil fish specialist, and they were able to identify much of the material previously labeled “fish.”

Because shark skeletons are made of cartilage rather than bone, their teeth are often the only fossils available.

The two scientists realized that some hand-sized teeth were from a previously unrecognized species. Their paper identifying and describing it was published this week in the journal Cainozoic Research.

The researchers spent months studying the teeth, comparing them to those of other fossil and modern-day sharks.

“We were able to determine that the fossil species was closely related to modern requiem sharks, so we used jaws of modern species to reconstruct how the teeth were arranged in the mouth of the extinct species,” Cicimurri said.

According to the researchers, Carcharhinus tingae teeth have not yet been found anywhere but Louisiana, where they are relatively common — evidence that these sharks lived in an ancient ocean that covered what is now Louisiana.

The scientists came to LSU to work on a chapter for a book that is not yet published, to be titled “Vertebrate Fossils of Louisiana.”