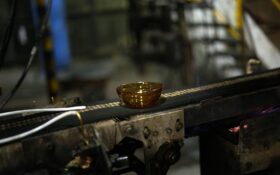 For the glassmakers at iconic French tableware brand Duralex, the mornings have become a horror show. Daily updates from energy traders drop into their email inboxes, showing the asphyxiating upward climb of prices for the natural gas and electricity that power their energy-devouring business.

Before Europe’s energy crisis — which took off after the COVID-19 pandemic and became a full-blown economic threat with Russia’s war in Ukraine — the price charts were reassuringly stable. They have since become a terrifying succession of peaks and troughs, with Russia choking off cheap natural gas deliveries in a battle of wills with European leaders over their support for Ukraine.

For Duralex, each price spike represents another bite from the bottom line of the 77-year-old company that counts generations of French families, Mongolian yak herders, Afghan diners and African tea drinkers among worldwide users of its glasses, bowls and plates. Actor Daniel Craig drank from one its “Picardie” tumblers, with a scorpion on his wrist, when playing James Bond in “Skyfall.”

With energy costs burning through the firm’s cash reserves and viability, Duralex President José-Luis Llacuna is taking radical but, he hopes, business-saving action: He’s stopping production. The thunderous machines that turn incandescent blobs of molten glass into hundreds of thousands of tableware items each day will fall silent for a few months on Nov. 1.

Duralex will join a growing array of European firms that have reduced and halted production because they’re hemorrhaging money on the energy needed to keep running.

“The first thing I do when I wake up in the morning is look at the daily change in electricity and gas prices,” Llacuna said in an interview at the plant outside Orléans in central France.

“Needless to say, there’s an incredible amount of volatility,” he added. “It’s truly a rollercoaster, and the outlook for the future is a complete unknown.”

Facing the risks of power shortages, rationing and blackouts when demand surges this winter and of an expected recession as businesses shut down, Europe is scrambling for energy alternatives, stockpiling gas and urging consumers to save. European Union energy ministers struggled to find consensus at emergency talks Friday on the bloc’s latest proposals for alleviating the crisis.

At Duralex, the costs of heating the furnace to above 1,400 degrees Celsius (above 2,500 Fahrenheit) with roaring torrents of flaming gas and of transforming the molten glass into tableware on the production lines manned by sweating workers are set to burn through 40% of the company’s revenue if it keeps producing, “which is untenable,” Llacuna said.

The production shutdown will last at least four months. The glass furnace can’t be switched off entirely because that could destroy it. Instead, it will be maintained in a hot slumber, slashing the firm’s energy use by half. The aim is to then fire it back up by the spring.

In the meantime, the 250 employees will work fewer days, with drops in pay just as inflation is gnawing at household budgets.

“It’s very hard to stomach,” said Michel Carvalho, a production line crew chief who has been with the company for 17 years.

“Around the world, everyone is suffering from this war,” he said. “We’re hostages. Absolutely. We’re being used. Because being asked to stop work is hard. And we’re not responsible for what is happening.”

Duralex will fall back on its stockpiles to keep customers supplied during the stoppage. But competitors are circling, using the production halt as an argument to try to lure away the company’s customers, Llacuna said. He is knocking on government doors for financial help, speaking by phone to the French economy minister last week.

A prolonged energy crisis, Llacuna warned, could be grim.

“It must not last three years,” he said. “Because then European industry will die, and that will be dramatic.”