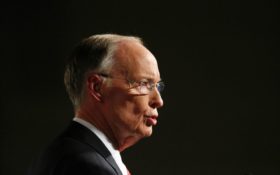 A governor who once opposed President Donald Trump because of Trump’s lewd comments regarding women has become wrapped up in a dirty sex scandal of his own — and Monday it led to his impeachment.

But now Bentley faces impeachment hearings before the House Judiciary Committee Monday over an embarrassing sex scandal and accusations of abuse of power.

Bentley was caught in a messy affair by his own wife when sultry text messages and ironically audio-recording of inappropriate conversations he was having with his top aide surfaced.

His wife Dianne immediately became suspicious when messages he was sending to his mistress were also sent to his state-issued iPad… that was in his wife’s possession.

“I sure miss you. I need you. I want you. You are the only one,” the married governor said in a text message to Rebekah Caldwell Mason, his top aide at the time.

Hypocrisy, thy name is Robert Bentley.

A suspicious Dianne Bentley did investigating of her own to get to the bottom of her husband’s suspected affair.

In March 2014, she secretly recorded her husband making a phone call, presumably to Mason. She started the recorder on her phone and left it in her purse, telling her husband she was going for a walk on the beach. In less than a minute after she was gone, the governor makes a call and professes his love to Mason, according to the report.

These recordings, and Bentley’s reaction to them, became a key part of the basis of the accusations the Alabama Ethics Commission made saying he misused state personnel and resources. The commission has referred the case to a prosecutor to decide whether Bentley should face criminal charges.

On election night in 2014, a paranoid Bentley believed his opponent had a copy of the recordings, and thought he knew who leaked them.

In an attempt to cover up his affair, he ordered Law Enforcement Secretary Spencer Collier to travel to Greenville to confront the suspect. Collier recounted the story last year in a news conference, a day after being fired by Bentley.

His use of government resources to allegedly cover up his wrongdoings didn’t stop there.

The governor’s former protection detail leader Ray Lewis testified that he expressed concern about Mason flying on state aircraft with the governor since she was not a state employee.

He said the governor’s campaign leased an aircraft. “He said to me the reason he leased the plane was so that Rebekah could be on the plane because he knew I objected to having her on the state aircraft,” Lewis told the special counsel.

Lewis also testified that on at least one instance, the governor asked him to stop and pick up Mason as they were driving to an event in Birmingham.

Another campaign staffer, Heather Hannah claimed Bentley threatened her to keep her mouth shut — or else.

The first lady’s chief of staff told the special counsel that Bentley twice delivered what she considered threats because he believed she had helped his wife record his steamy conversation with Mason.

“He confronted me one night, he came in and put his finger in my face and was like you will never work in the state of Alabama again if you tell anybody about this,” she said. The confrontation happened in the kitchen of the governor’s mansion, she said.

Hannah said the first lady brought her the recordings and asked her to make a copy. The first lady called her husband “dumb” after catching him and was upset because “part of her still was trying to hold on to the fact that he was not having an affair,” Hannah said.

It’s clear that this Anti-Trump governor has different standards for himself and the President, and only condemns inappropriate behavior when he isn’t the one in question.