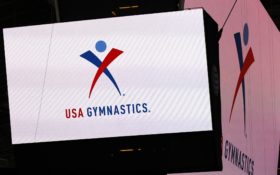 USA Gymnastics is turning to bankruptcy in an attempt to ensure its survival.

The embattled organization filed a Chapter 11 bankruptcy petition on Wednesday in an effort to reach settlements in the dozens of sex-abuse lawsuits it faces and to avoid its potential demise at the hands of the U.S. Olympic Committee.

USA Gymnastics filed the petition in Indianapolis, where it is based. It faces 100 lawsuits representing over 350 athletes in various courts across the country who blame the group for failing to supervise Larry Nassar, a team doctor accused of molesting them.

“Those discussions were not moving at any pace,” Carson said. “We as a board felt this was a critical imperative and decided to take this action.”

The filing does not affect the amount of money available to victims, which would come from previously purchased insurance coverage, she said. Carson said the insurance companies “are aware we’re taking this action and our expectation is they will come to the table and pay on our coverage.”

Carson added: “This is not a liquidation. This is a reorganization.”

While Carson acknowledged that sponsorship is down since the first women came forward against Nassar in the fall of 2016, she described the financial condition of USA Gymnastics as “stable.”

USA Gymnastics reported assets in a range of $50 million to $100 million and a similar range of liabilities, with 1,000 to 5,000 creditors. The organization said its largest unsecured creditor is former president and CEO Steve Penny, who is owed $339,999.96. USA Gymnastics is disputing Penny’s claim, though attorney Cathy Steege declined to get into the specific nature of the dispute.

Penny resigned under pressure from the USOC in March 2017. Two other presidents — Kerry Perry and former U.S. Rep. Mary Bono — have followed in what has become a revolving door amid the organization’s hierarchy.

It’s that chaos at the top that led the USOC to initiate the process of removing USA Gymnastics as the sport’s national governing body at the Olympic level — a step that’s taken only under the most extreme circumstances.

In an open letter to the gymnastics community in November, USOC CEO Sarah Hirshland said “you deserve better,” and that the challenges facing USA Gymnastics were more than it was capable of overcoming as currently constructed.

Carson said the legal maneuvering Wednesday delays the USOC’s efforts to strip its designation as a national governing body.

“We always have a dialogue going with them and intend to make it clear with them we have a lot to talk about and we want to keep that going,” she said.

USOC spokesman Patrick Sandusky said the committee is reviewing the filing’s potential effect on decertification. “Financial stability and viability are essential for a national governing body to operate in the best interests of the athletes,” Sandusky said.