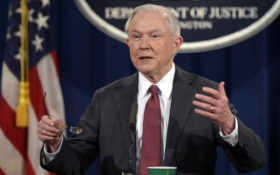 Attorney General Jeff Sessions has had enough of the leaks coming out of Washington, D.C. — and he has a new plan to end these leakers once and for all.

He might even start prosecuting liberal journalists that help these leakers.

Sessions pledged on Friday to rein in government leaks that he said undermine American security, taking an aggressive public stand after being called weak on the matter by President Donald Trump.

The nation’s top law enforcement official said the number of criminal leak probes had dramatically increased in the early months of the Trump administration.

Justice Department officials said they were reviewing guidelines meant to make it difficult for the government to subpoena journalists about their sources, and would not rule out the possibility that a reporter could be prosecuted.

“No one is entitled to surreptitiously fight their battles in the media by revealing sensitive government information,” Sessions said in an announcement that followed a series of news reports this year on the Trump campaign and White House that have relied on classified information. “No government can be effective when its leaders cannot discuss sensitive matters in confidence or to talk freely in confidence with foreign leaders.”

Meanwhile, a White House adviser raised the possibility of lie detector tests for the small number of people in the West Wing and elsewhere with access to transcripts of President Donald Trump’s phone calls. The Washington Post on Thursday published secret transcripts of his conversations with the leaders of Mexico and Australia.

Trump counselor Kellyanne Conway told “Fox & Friends” that “it’s easier to figure out who’s leaking than the leakers may realize.” And might lie detectors be used? She said: “Well, they may, they may not.”

Trump’s outbursts against liberal media organizations he calls “fake news” have led to predictions that his administration will more aggressively try to root out leaks, and the timing of the Justice Department’s announcement — one week after the president complained on Twitter that Sessions had been weak on “intel leakers” — shows the attorney general was working to get back in sync with the man who appointed him.

Sessions said in his remarks that his department has more than tripled the number of active leaks investigations compared to the number pending when President Barack Obama left office, and the number of referrals to the Justice Department for potential investigation of unauthorized disclosures had “exploded.”

“This nation must end the culture of leaks. We will investigate and seek to bring criminals to justice. We will not allow rogue anonymous sources with security clearances to sell out our country any longer,” Sessions said in his remarks.