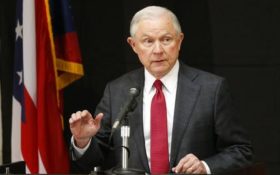 Attorney General Jeff Sessions has a simple message for liberal strongholds around the country: Ignoring laws you dislike is no longer acceptable.

The Justice Department sent letters to the Democratic cities struggling with gun violence, telling them they will be ineligible for a new program that aims to root out drug trafficking and gang crime unless they give federal immigration authorities access to jails and provide advance notice before releasing someone in custody who is wanted on immigration violations.

“By taking simple, common-sense considerations into account, we are encouraging every jurisdiction in this country to cooperate with federal law enforcement,” Sessions said in a statement that accompanied the letters. “That will ultimately make all of us safer — especially law enforcement on our streets.”

In the letters, the department asked the four prospective cities’ police departments to show proof of their compliance by Aug. 18.

The threat marks Sessions’ latest effort to force local authorities to cooperate with federal immigration authorities, part of a push to reduce crime he believes is linked to illegal immigration.

Sessions has pledged to make fighting street crime the Justice Department’s top priority, but the strategy is putting him at odds with Democratic city leaders, who claim the best way to fight crime is to prevent local police from helping rid the streets of illegal immigrants.

Sessions last week told jurisdictions they need to meet the same conditions or lose out on millions of dollars from a separate program that aims to send grant money to support law enforcement. That move made some local officials more defiant.

The Justice Department in June tapped 12 cities to receive aid through the Public Safety Partnership, and officials said the four cities that were sent the letters had expressed interest in the next chance at participating.

Cities were chosen based on higher-than-average rates of violence and willingness to receive the help and training.

Cities that want to be involved going forward will have to show they allow unfettered communication between police and federal immigration authorities, give agents access to jails in order to question immigrants, and provide them 48-hours’ notice when someone in the country illegally is about to be released.