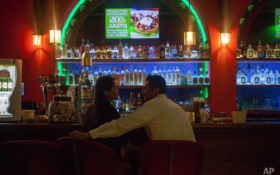 A British restaurant has given some customers an unexpected treat, accidentally serving them a 4,500-pound ($5,760) bottle of red wine.

The Hawksmoor Manchester said on Twitter it hoped the diners “enjoyed your evening” after getting the 2001 bottle of Chateau le Pin Pomerol instead of the 260-pound ($333) bottle they had ordered of Chateau Pichon Longueville Comtesse de Lalande 2001.

A restaurant spokeswoman says “it was a very busy night at the restaurant and a very simple mistake. A member of staff picked up the wrong bottle” of Bordeaux. The restaurant told the employee that “one-off mistakes happen” and added “we love you anyway.”

The report sparked a flurry of amused responses on Twitter, with many people asking for a table served by the same waiter and others praising Hawksmoor for its comments to its employee.