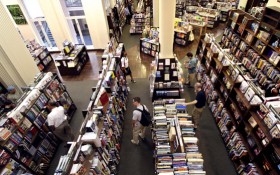 Portland State University librarians in Oregon finally got their hands on two overdue books — a half century after they were checked out.

The Oregonian reports that someone put two books checked out in 1963 into a book drop, accompanied by an anonymous, handwritten note.

University librarian Joan Petit says the books are so old that staff members don’t know what to do with them. In the time since they were borrowed for a high-school speech class, card catalogs have been digitized and classification methods have changed.

But the librarians, who no longer charge late fees, say they are thankful that someone returned “Basic Principles of Speech” and “Preface to Critical Reading.”

The anonymous note acknowledges that the books are “outdated — yes — but I’ll let you decide their fate now.”