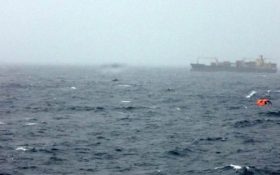 A paddleboarder has been convicted of assault for hitting a surfer with his paddle during an argument over a wave off the Southern California coast.

KNSD-TV says Paul Konen was convicted Thursday in San Diego and could now face up to seven years in prison.

Authorities say Eslinger was struck so hard that he suffered brain damage and still has speech problems.