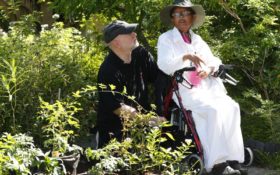 A Miami-area couple whose front-yard vegetable garden prompted a 6-year legal battle with their village has held a ceremonial replanting of veggies under a new Florida law legalizing such gardens statewide.

Sixty-three-year-old Hermine Ricketts and her 60-year-old husband Tom Carroll planted jalapenos, green bell peppers and other vegetables on Monday when the bill went into effect. Miami Shores previously made such front yard gardens punishable by a daily fine of $50 on grounds they were unsightly and violated zoning codes.

Miami Shores told Ricketts to remove her garden in 2013, prompting their lengthy lawsuit. An appeals court backed the village, but then the Legislature stepped in to legalize the gardens.