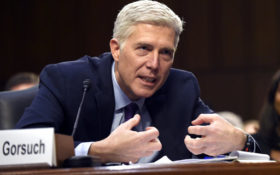 Senate Republicans are prepared to drop the “nuclear option” Thursday in their fight with liberals over Judge Neil Gorsuch’s confirmation to the Supreme Court — and it has some Democrats running for the hills.

One by one, seated at desks centuries old, senators will stand and cast their votes for a Supreme Court nominee.

For the 10 Democrats facing tough re-election next year in states that President Donald Trump won, their confidence seems to be fading.

“Resist” is the rallying cry for angry liberal voters, and that applies to all Trump nominees — even one as popular as Gorsuch, a mild-mannered jurist who won unanimous Senate backing to the appellate court in 2006.

Democratic voters have flooded lawmakers’ offices with angry phone calls, violently protested outside state offices, and tweeted vulgarities if senators even hint at being open to Trump’s plans to “drain the swamp.”

But they’re not alone. Fed up conservatives are also speaking out — and it has Democratic senators nervous.

“I come from a state that no matter how I vote, 50 percent of the people are mad,” says Missouri Sen. Claire McCaskill, who said she will still oppose Gorsuch. “The only difference is that the ones who are happy are really happy.”

Already in the minority, Democrats face tough political odds in next year’s midterms, defending 25 seats for caucus members to the GOP’s eight.

Since 2008, Democrats have been losing seats across the board — and the looming question for these 10 lawmakers is whether a Supreme Court vote will still resonate with voters in 19 months or whether the economy, jobs, or healthcare would be a greater concern.

Trump won McCaskill’s state by almost 20 percentage points and conservative groups are running ads against her.

“I think that Montanans have always expected me to have a reason for why I voted,” Tester said, adding: “I have plenty on Gorsuch.”

Marlene Johnson, 65, of Helena, said she hopes Tester’s opposition will hurt him politically. She is closely following the debate and called Gorsuch a decent person who is qualified to sit on the Supreme Court. She says Tester is “letting Montana down.”

Tester has never won more than 50 percent of the vote.

In swing states where Trump had narrower victories, the decision seems to have been easier. Pennsylvania Sen. Bob Casey, Florida Sen. Bill Nelson, Wisconsin Sen. Tammy Baldwin and Michigan Sen. Debbie Stabenow are all opposing Gorsuch. Trump won those states by a point or less.

It’s unclear if their eventual opponents will use the issue against them in 2018. Florida Gov. Rick Scott, viewed as a likely challenger to Nelson, has so far avoided any direct criticism, though he supports Gorsuch.

In Wisconsin, though, Republican Gov. Scott Walker, who is also up for re-election next year, tweeted to Baldwin in February that “pandering to liberal special interests in Washington is more important to you than listening to WI residents.”

Comment, “Do the right thing!” below if you DEMAND our lawmakers confirm Gorsuch