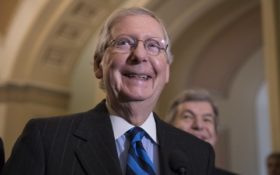 McConnell said the measure would rewrite existing defense limits that have “hamstrung our armed forces and jeopardized our national security.”

The measure, aides said, also contains almost $90 billion in overdue disaster aid and an increase in the government borrowing cap that would prevent a first-ever U.S. government default on its obligations.