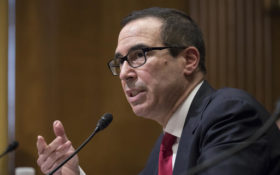 The Senate is poised to confirm President Donald Trump’s pick for Treasury secretary despite complaints by Democrats about Steven Mnuchin.

Votes on Trump’s Cabinet picks have exposed deep partisan divisions in the Republican-controlled Senate, with many of the nominees approved by mostly party-line votes.

The vote Monday evening on Mnuchin is expected to follow the same pattern. Finance Committee Republicans unanimously voted in favor of Mnuchin after committee Democrats boycotted the vote.

The Senate is also scheduled to vote on the nomination of David Shulkin to head the Department of Veterans Affairs. His confirmation has gone much smoother than others. The Senate Veterans Affairs’ Committee voted unanimously to approve him.

Republicans said Mnuchin’s long tenure in finance is an ample prerequisite for the Treasury job. Mnuchin is a former top executive at Goldman Sachs.

“This Treasury nominee is smart, he’s capable, and he’s got impressive private-sector experience,” said Senate Majority Leader Mitch McConnell, R-Ky. “We need him confirmed as soon as possible so he can begin to tackle these challenges and reverse the last eight years of economic heartache.”

In his testimony before the committee, Mnuchin defended his actions while heading OneWest. He said he had worked hard during the financial crisis to assist homeowners with refinancing so that they could remain in their homes.

He told the committee that his bank had extended more than 100,000 loan modifications to borrowers.

Mnuchin called his failure to disclose assets an oversight. After meeting with committee staff Mnuchin amended his disclosure forms and also disclosed his position as director of Dune Capital International in the Cayman Islands.

When pressed by Democrats to explain the omissions, Mnuchin said: “I did not use a Cayman Island entity in any way to avoid taxes for myself. There was no benefit to me.”

The Treasury Department is responsible for a wide range of activities, including advising the president on economic and financial issues. The department oversees the IRS, negotiates tax treaties with other countries, imposes economic sanctions against foreign governments and individuals, and targets the financial networks of terrorist groups and drug cartels.

The department also issues the bonds that finance the government’s deficit spending.