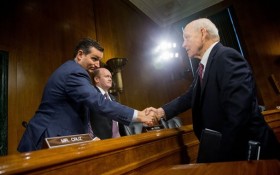 WASHINGTON (AP) — After a week of fighting with other Republicans, Sen. Ted Cruz took on a more traditional GOP target Wednesday: the IRS.

“We have seen the creation of an entity that I believe is no longer serving the interests of the American people,” said Cruz, a Texas Republican who has called for the IRS to be abolished.

Cruz was referring to a scandal that erupted in 2013 in which the IRS acknowledged that agents had improperly singled out tea party and other conservative groups for extra scrutiny when they applied for tax-exempt status during the 2010 and 2012 elections.

The mistreatment of conservative groups was detailed in a 2013 report by the agency’s inspector general.

“Many of the allegations just made at the opening of this hearing strike me as a rehashing of complex conspiracy theories already thoroughly investigated and dismissed by the inspector general himself,” Coons said.

Last week, Cruz raised the ire of fellow Republicans when he accused Senate Majority Leader Mitch McConnell of lying during a speech on the Senate floor. Cruz said McConnell, R-Ky., misled fellow senators when he said there was no deal to allow for a vote on extending the Export-Import Bank, a small federal agency that helps U.S. companies sell their products overseas.

Several Republican senators said Cruz violated the decorum of the Senate floor, but Cruz stood by his comments. On Wednesday, Cruz was on much safer political ground when he took on the IRS.

The tax agency has become an easy target for conservatives since the tea party scandal broke in 2013. Congress has cut the IRS budget, even as the agency takes on more duties associated with President Barack Obama’s health law.

This week, 21 Republican House members called on Obama to fire IRS Commissioner Koskinen, saying he has obstructed congressional investigations. The IRS disputed the accusation and the Treasury Department issued a statement supporting Koskinen.

At Wednesday’s hearing, Koskinen said the agency has taken steps to make sure that tax-exempt groups are no longer mistreated. Koskinen cited a recent report by the inspector general that said the IRS has taken “significant actions” to improve the processing of applications for tax-exempt status.

“The situation described by the inspector general in his May 2013 report should never have happened, and we are doing everything possible to ensure that the mistakes referenced in the report do not happen again,” Koskinen said.

Cruz wasn’t the only one who scolded the IRS Wednesday.

At a hearing in U.S. District Court in Washington, a federal judge threatened to hold IRS officials in contempt for not following an order to produce documents as part of a Freedom of Information Act lawsuit.

“Officers of the court who fail to comply with court orders will be held in contempt,” Judge Emmet G. Sullivan said in a written order issued Wednesday. “Also, in the event of non-compliance with future court orders, the commissioner of the IRS and others shall be directed to show cause as to why they should not be held in contempt of court.”

The lawsuit was brought by Judicial Watch, a conservative watchdog that filed a series of information requests with the IRS shortly after the tea party controversy erupted in May 2013.

Sullivan ordered the IRS to produce documents as they are available every Monday.