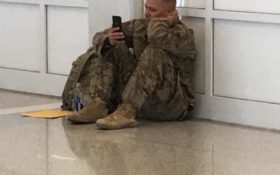 American Soldier Brooks Lindsey was in Fort Bliss in Texas preparing to deploy on a nine-month tour in Kuwait when he received a critical call from his wife — it was go time.

The soldier’s wife was pregnant, and their daughter was making an appearance in the world earlier than expected.

The couple made quick plans for Lindsey to catch a flight from El Paso to Dallas, and then Dallas to Mississippi. Unfortunately, his flight was delayed and his wife’s water broke — and that’s when his fellow airline passangers pulled off the unthinkable.

Lindsey’s wife, Haley, went in for what she thought was a routine check up before their baby’s arrival.

After telling Brooks there was no hope in him getting home, I received a call from my Doctor that my [blood] pressures wa too high, and the baby was being stressed,” the 22-year-old wrote on the blog Love What Matters. “She told me to be at the hospital in an hour and they would go ahead and induce.”

Lindsey’s plan was to come home for four days to meet his daughter and spend some time with family, except Haley’s water broke as Lindsey boarded his first flight back to Mississippi.

The second flight home was unexpectedly delayed which meant Lindsey would miss out on the birth of his daughter. So he chose the next best thing, to watch the birth live streaming in video chat — and his fellow passengers united behind him to make sure the plane stayed put while he did so.

“Brooks was telling me it was okay, and I was doing so good and I heard him wincing and saying ‘wow!’ through my pushes,” Haley Lindsey wrote. “I could hear people in the airport talking and cheering!”

As the baby was about to make her first appearance, Lindsey was told to begin boarding his flight.

“All I remember was my Doctor screaming, ‘Don’t let him board the flight! She’s here! She’s here!’” Lindsey wrote. “So, the airport personnel let him sit there and watch till it was over!”

Here’s the video of Brooks Lindsey watching Millie come into the world ????

Posted by Haley Fritz Anne Lindsey on Saturday, May 5, 2018

The airline delayed the flight again to allow the soldier to watch his first born come into this world, and his fellow passengers cheered the news.

Travelers in the airport became invested in the birth of Lindsey’s daughter, and passenger Tracy Dover shared a photo of Lindsey sitting on the airport floor watching as his wife gave birth.

This Army soldier was on my delayed flight home yesterday to MS. He had to watch the birth of his daughter on FaceTime….

“This Army soldier was on my delayed flight home yesterday to MS,” Dover wrote in the post. “He had to watch the birth of his daughter on FaceTime. He was crying and our hearts were breaking. We all gave him space. When we heard the baby cry, we all rejoiced for him.

“I wanted to share this because I never want us to forget about our soldiers who serve us everyday and the sacrifices they make.”

Lindsey made it home an hour and a half after his daughter, Millie, was born and went straight to the hospital from the airport.

“When (Brooks) walked in at 7:20 it was just Millie and me,” Haley Lindsey wrote. “He picked her up and held her for five minutes and kept saying ‘wow I can’t believe we just had a baby.'”

It is times like these that Americans must give thanks to our veterans and active duty soldiers that put their lives on the line and sacrifice missing out on the most amazing gifts — like their daughter’s birth.

We must also commend the airline that allowed Lindsey the extra 25 minutes to watch Millie come into this world, and his fellow passengers for their support.

Paying it forward to our soldiers can be as simple as saying “Thank you,” and this airline and these passengers gave thanks in a major way.