Did you see this!? Tucker Carlson DESTROYS clueless Dem lawmaker - The Horn News 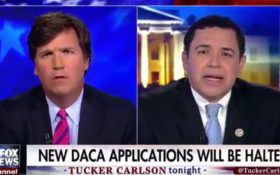 When Carlson proposed a simple query to the Congressman –who now has six months to determine a solution for the failed program — it was clear Cueallar had no answer, and tried desperately to avoid the question.

He responded, “This is something that I think Congress will have to debate and this is why I feel that Congress — we’re going to be debating this.”

Of course, President Donald Trump has already announced that Congress will be debating a solution to the end of the DACA program. Clearly Democrats in Congress have so idea what they will do.

Carlson pressed him further by repeating the question: “You are in Congress, what do you think the time limit should be? You don’t have an opinion on it?”

Instead of answering Cuellar continues focusing on the children that were brought to America illegally 29 years ago — ignoring the fact that this will continue to be an ongoing issue without further legislation.

BREAKING: A new version of the Bible has been discovered (sponsored)

And finally Carlson had enough.

“You are spinning. I’ve asked you the same question four times, which is at what point do we decide we are going to enforce these laws? You won’t answer the question.”

Cuellar responded, “You keep asking the same question I’m going to give you the same answer.”

Which is, apparently, no answer at all.

See the stunning exchange below.