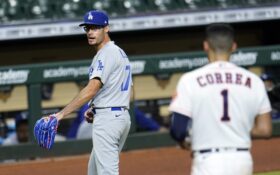 Benches cleared Tuesday night in the first game between the Astros and Dodgers since it was revealed that Houston stole signs en route to a 2017 World Series championship that came at Los Angeles’ expense.

The Dodgers led 5-2 after a five-run fifth when Kelly, who was with Boston in 2017 and also faced Houston that postseason, threw behind Bregman for ball four. Bregman grimaced after jumping to avoid being hit, then trotted to first base.

There were two outs in the inning when Kelly threw an errant breaking ball over Correa’s head. Correa took off his batting helmet and stared Kelly down before continuing the at-bat.

Kelly struck out Correa, then stuck out his tongue and made a face in his direction. Correa started walking toward him and the players exchanged words, prompting the benches to clear. There was plenty of yelling and crowding — outlawed as MLB tries to play a 60-game season amid a pandemic — but there was no pushing or punches thrown.

You can view that video below:

Joe Kelly strikes out Carlos Correa. Pleasantries are exchanged … then we get our first socially-distanced bench clearing altercation of the season.pic.twitter.com/dmQElWppqd

Order was restored after a couple of minutes, but Houston manager Dusty Baker was still upset before play resumed and got in the face on an umpire.

Houston was punished by the commissioners’ office in January for the sign-stealing scheme, which led to the firing of general manager Jeff Luhnow and manager AJ Hinch.

The Dodgers had harsh words for the Astros during spring training, but Los Angeles manager Dave Roberts said before the game that he didn’t think his team would retaliate.