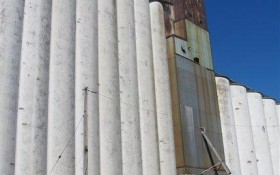 Ugly to some, beautiful to others, but just about everyone will agree: They look like enormous cement pipe organs. Now, the worn-looking collection of grain silos left over from Buffalo’s heyday as a shipping hub along the Buffalo River are getting another look.

Too historic to tear down, too far gone to re-open, these “industrial cathedrals,” as preservationist Tim Tielman describes them, have stood frozen in time as Buffalo’s waterfront has transformed around them.

But lately, these sleeping giants are being re-awakened, not as off-limits industrial workhorses but places to eat, drink and play for a public eager to literally touch the city’s past.

“It’s all about a re-appreciation of what makes us unique as a region,” said Rick Smith, who bought a collection of the grain elevators near his Rigidized Metals business with plans for an ethanol plant that were later scrapped as too costly. Since then, he has come to view the structures as “found art,” its potential revealing itself with the help of creative types whose perspective he values.

His “Silo City” and the grounds around them have become the setting for theater productions, outdoor concerts, foot races, literary readings and art installations, with plans for snowshoeing through a maze of trails to keep people coming year-round.

Nearby, the sprawling RiverWorks complex is the site of roller derby and 500-seat restaurant. One former grain silo has been covered with vinyl decals to resemble a giant Labatt Blue six-pack, making clear the sponsor of an annual pond hockey tournament held each winter in its shadow. The “six-pack” will soon house a craft brewery, developer Doug Swift said. 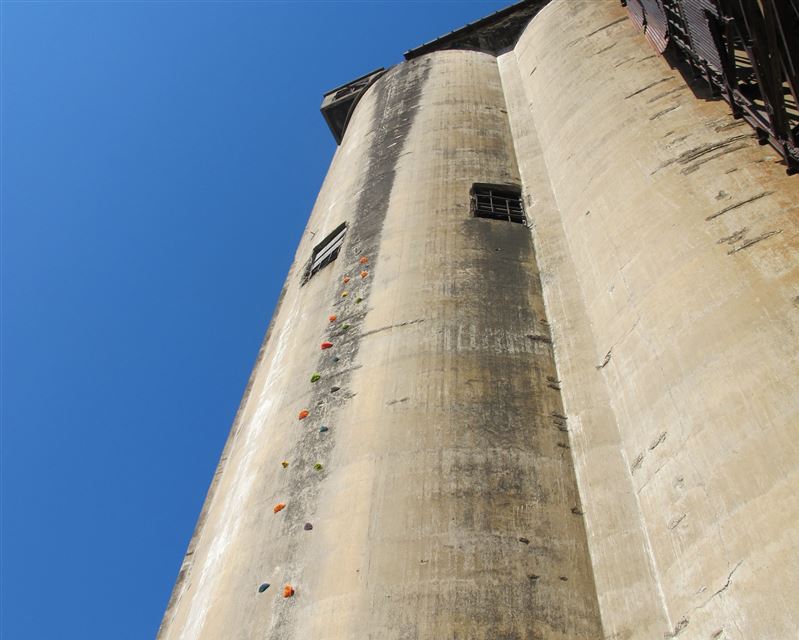 He envisions a climbing gym, ropes course and zip-lining next.

“What we have here is really unique, historical, industrial architecture that speaks to Buffalo,” Swift said, “and we wanted to incorporate that history and that architecture into the space.”

More than 30 concrete grain elevators were built during the first half of the 20th century, evolving from earlier wooden versions, to store Midwestern grain that was being transported from the Great Lakes to eastern ports via the Erie Canal. The grain was offloaded from larger lake freighters and transferred to canal barges at Buffalo, the canal’s western terminus.

The city saw its grain business dry up with the opening of the St. Lawrence Seaway in 1959, which allowed ships to bypass Buffalo. Over the next two decades, several of the elevators closed and were demolished. Thirteen of them remain today, with three in use, comprising what is believed to be the largest collection of the structures in the world, authorities say. 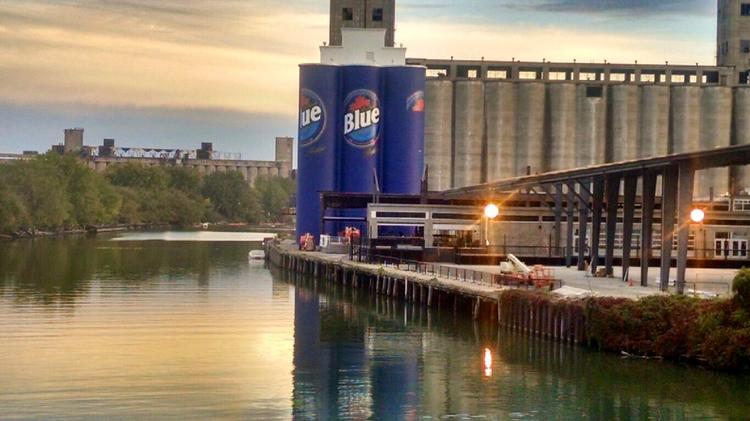 “Just the sheer kind of grandness of the architecture and where it’s situated on the Buffalo waterways makes it a really terrific site,” said Dan Shanahan, artistic director of Buffalo’s Torn Space Theater. The company has staged four site-specific productions at the grain elevators, at times using exteriors as projection screens while taking audiences through the echoing, often eerie interiors.

Next month, New York state’s Erie Canal Harbor Development Corp. plans to turn the switch on a light show that will use the Connecting Terminal grain elevator as a year-round, ever-changing projection screen.

It’s all part of a renaissance of sorts in upstate New York’s largest city, driven by the most significant commercial building boom in 50 years. Along with waterfront improvements, there have been major additions to the city’s medical campus and the opening of a new hockey and hotel complex downtown built by the owner of the Buffalo Bills and Sabres, Terry Pegula. Construction of what will be one of the world’s largest solar panel production plants also is well underway, a project landed with the help of a $1 billion pledge by Gov. Andrew Cuomo intended to leverage additional investment.

Tielman, who has advocated for the grain elevators’ preservation for more than 20 years, sees the public coming around and appreciating their place in the city’s cultural landscape. He compares them to the Colosseum in Rome or ruins in Ireland, all “achievements of great civilizations.”

Smith, too, said he hears fewer calls for their demolition from old-timers who’d seen them as reminders of “our failed present.”