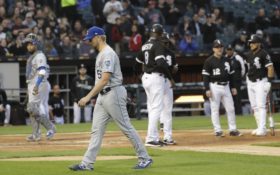 Kansas City Royals starter Glenn Sparkman has been ejected for hitting Chicago’s Tim Anderson in the helmet with a pitch.

Sparkman struck Anderson in the bill of his helmet in the second inning Wednesday night with nobody out, a runner on first and the White Sox leading 2-1. Anderson’s helmet was knocked off his head, and plate umpire Mark Carlson immediately ejected the 27-year-old right-hander.

It was Anderson’s first at-bat of the series. He wasn’t in the lineup the previous four games because of right wrist soreness.

Last month, Anderson was hit by Kansas City’s Brad Keller in the backside after an elaborate bat flip on a home run in his previous at-bat. That sparked a benches-clearing scuffle. Keller was suspended five games and Anderson for one.

Sparkman was making his second start of the season.