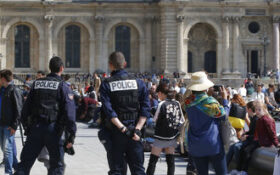 A Russian gallery says one of its security guards has vandalized an avant-garde painting on loan from the country’s top art repository by drawing eyes on the picture’s deliberately featureless faces. It said the damage can be repaired.

The Yeltsin Center in Ekaterinburg said the vandalism of the painting “Three Figures” by Anna Leporskaya occurred Dec. 7. It said the suspected culprit worked for a private company providing security at the gallery.

The painting, dating from the 1930s, shows three torsos and heads with hair but no facial features; the vandal drew eyes on two of them with a ballpoint pen.

The Yeltsin Center said the painting has been sent for restoration to the State Tretyakov Gallery in Moscow, which owns it.

The Russian news site RBK said a criminal case has been opened on charges that carry a sentence of up to three months in prison. The picture had been reportedly insured for 74.9 million rubles (roughly $1 million).

Leporskaya, who lived from 1900-1982, was a student of Kazimir Malevich, a seminal Russian abstract artist best known for his 1915 work “Black Square.”

Take a look at the new painting, before and after —