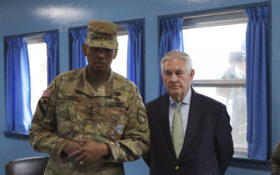 Secretary of State Rex Tillerson plans to skip a semiannual meeting of NATO foreign ministers this spring and will instead travel to a Group of 7 meeting of top diplomats in Italy and then to Russia.

U.S. officials said Monday that Tillerson will meet NATO diplomats this week in Washington for a conference on defeating the Islamic State group, suggesting there was no need for him to attend the meeting of the alliance in Brussels. The State Department’s third-ranking official, Under Secretary of State Tom Shannon, will represent the U.S. at that meeting, the officials said.

The officials said Tillerson would attend the G7 meeting in Sicily in May and then travel to Moscow.