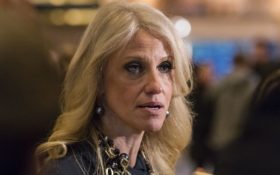 The senior White House counselor proved to be as tough as they come Monday evening, when she was heckled by an angry liberal man in the Washington Reagan Airport.

A source told The Daily Caller that two Secret Service members had to hold back Conway after a white male, standing about 20 feet from her, shouted, “Keep trashing America!”

Washington paparazzi photographer Mark Wilkins claimed Conway had clearly had it with the mouthing off stranger.

She lambasted him as a coward, saying, “I like the way you talk sh*t while I’m walking away.”

That’s when Secret Service agents put their arms up in front of Conway to stop her from further action against the cowardly heckler.

“I don’t know what you think of her, but Kellyanne is a rock star,” Wilkins said, praising the conservative woman’s courage.

Conway has had to deal with obnoxious protesters in the past, and has generally kept her cool.

But this time she decided to stand up for herself — and her opponent had to hide behind the outstretched arms of the Secret Service.

Conway’s actions sent a strong message to hecklers and liberal bullies that she will not be intimidated into silence.

Luckily she has the Secret Service by her side… to protect those nasty folks that try to harass her!