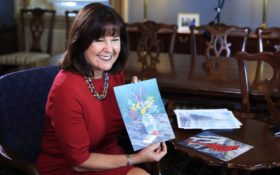 When Karen Pence found out that an art therapist in hurricane-ravaged Puerto Rico couldn’t afford the clay her clients needed, she sprang into action.

A trained watercolor artist and advocate of the little-known mental health profession, Vice President Mike Pence’s wife went to the Virginia art supply store she frequented when they lived in the state during his tenure in Congress, bought 120 pounds of self-drying clay and packed it aboard Air Force Two for their flight down to survey the damage.

“She cleaned him out,” the vice president said of the store’s owner.

Mrs. Pence made art therapy her cause ever since she first learned about it more than a decade ago. She has visited numerous art therapy programs, both in the U.S. and abroad, and on Wednesday in Florida, nine months into the administration, she planned to formally announce the goals for her art therapy initiative.

She wants to help people understand the difference between art therapy and arts and crafts, and to grasp that art therapy is a viable option for treating trauma, injury and other life experiences. She also wants to encourage young people to choose art therapy as a career.

“I don’t think that a lot of people understand the difference between therapeutic art and art therapy,” Mrs. Pence, a trained watercolor artist, told The Associated Press in an exclusive interview before the announcement at Florida State University in Tallahassee. The school has an art therapy program she described as “tremendous.”

Blabbing to a girlfriend can be therapeutic, she explained, but it is not the same as art therapy, which has three elements: a client, a trained therapist and art.

As passionate as she is about raising art therapy’s profile, other issues help make Karen Pence tick, too.

One of them is helping military families, especially spouses. Her only son, Michael, is in the Marines.

There’s also her interest in honeybees. Mrs. Pence installed a beehive on the grounds of the U.S. Naval Observatory, where the vice president’s official residence is located, to help call attention to a decline in managed bee colonies that officials say could negatively affect U.S. agricultural production. She had a beehive at the Indiana governor’s residence for the same reason.

Now 60 and married to the vice president since 1985, Mrs. Pence has long been viewed as one of her husband’s most trusted political advisers. They are often together on trips, at the White House, or at the observatory, almost always holding hands.

Since returning to Washington in January (the family lived in the area when her husband served in Congress), she has accompanied the vice president on goodwill tours of Europe, Asia and Latin America, as well as trips to survey recent hurricane damage in Texas, Puerto Rico and the U.S. Virgin Islands. She tries to visit art therapy programs wherever she goes. Journalists who travel with Pence often keep an eye out for his wife; she often brings them cookies when he ventures back to the press cabin for small talk.

She’s even done a little campaigning, urging Virginians to vote next month for Ed Gillespie in what’s viewed as a tight gubernatorial race.

“It really makes a difference, I can tell you. Nobody thought that we were going to win,” she said, an apparent reference to the Trump-Pence ticket.

The vice president often refers to his wife as the family’s “prayer captain.” She has led congregations in prayer during their hurricane-damage trips.

“We’re people of faith so we just try and approach everything with prayer,” Mrs. Pence said from her sunny, second-floor office in the Eisenhower Executive Office Building in the White House complex, where she and her staff enjoy coveted views of the Washington Monument and Jefferson Memorial. Art therapy drawings given as gifts adorn the outer office.

She proudly displayed several of her paintings, including of the Capitol dome, the vice president’s residence, a Ball canning jar-turned-flower vase, a cardinal bird and a pink peony. She turns many of her watercolors into prints and boxed notecards that she gifts to art therapists she meets.

Except for myriad pets, including two cats, a dog and a rabbit named Marlon Bundo, the Pences are empty nesters. Their son and two adult daughters are off on their own.

“I think for us this is a good time in our life for this role because our kids are out of college. They’re living their own lives,” Mrs. Pence said.

She’s also launching a blog in conjunction with Wednesday’s announcement to chronicle her visits to art therapy programs.