Sean Spicer's NEXT job will stun EVERYONE - The Horn News 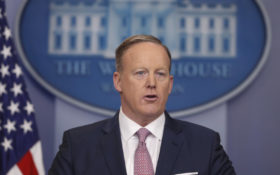 Former White House press secretary Sean Spicer has a new job — and it has some liberals screaming mad.

Spicer is joining Christie Brinkley, Hannah Brown of “The Bachelorette” and others as contestants on the next season of “Dancing with the Stars.”

He had a contentious relationship with the press and is remembered for claiming that the president’s inauguration was the most widely seen in history.

Spicer’s addition apparently didn’t go down well with co-host Tom Bergeron, who tweeted that he earlier told producers he hoped the new season would be a “joyful respite from our exhausting political climate” and urged them not have any “divisive bookings.”

Producers apparently disagreed. “We can agree to disagree, as we do now, but ultimately it’s their call,” Bergeron wrote.

In a change from previous seasons, viewers won’t learn the celebrity-pro pairings until the season premiere. Professional dancer Peta Murgatroyd returns to the ballroom this year.