Sean Spicer has a new job in media - The Horn News 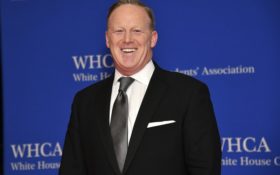 After some moves outside of the nation’s capital, he’s returning to D.C. in a new media job.

Spicer dabbled in television with his stint on “Dancing With The Stars,” and it seems as though he has taken to the limelight — so much so that Spicer has landed a cable show of his own. It’s even named after him as well.

“Spicer & Co.” will “lead an ensemble of Washington insiders, experts, journalists, and power brokers to analyze the day’s top headlines from the Beltway and the key news from the U.S. and the world,” according to Newsmax TV.

The program will debut March 3 on Newsmax TV, a conservative news network that has grown considerably in recent years as an alternative to the more traditional channels.

Newsmax CEO Christopher Ruddy not only mentioned Spicer’s insider expertise of the White House functions, but also the television ratings that his daily press briefings attracted, describing them as “off the charts, a phenomenon that hasn’t happened before or since.”

“Sean has been on the inside of how decisions are made in a way so few have,” Ruddy added. “He was a success as White House press secretary because he connected to ordinary Americans.”

As for Spicer himself, he’s promising viewers a never-before-seen deep dive into Washington politics.

“We are going to offer viewers a unique perspective and insights into what’s really happening, who is up, who’s down and most importantly how it’s going to affect their lives.”

“We are going to invite our viewers into a conversation that is totally unique.”

“We will ask the questions and cover the topics that everyone in America is thinking about but no one is asking or talking about.”