Schwarzenegger: THIS person should run against Trump in 2020 - The Horn News 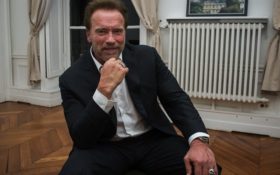 The former Republican California governor, movie star and bodybuilder told the Los Angeles Times in an interview published Wednesday that Kasich is “a man of substance” who has state and federal government experience, is a moderate and “has vision.”

Schwarzenegger also backed Kasich for president in 2016. The two men work together annually on the Arnold Classic bodybuilding competition in Ohio.

There is no love lost between Trump and Schwarzenegger. Schwarzenegger replaced him as the host of “Celebrity Apprentice,” and Trump repeatedly mocked him for poor television ratings.

For his part, Kasich says he’s not running for anything.