School district votes to let teachers be armed to protect against... - The Horn News 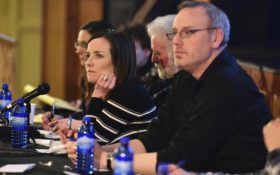 The Wyoming school district where U.S. Education Secretary Betsy DeVos suggested that teachers might need to be armed to protect children from grizzly bears voted Tuesday on doing just that, though concerns about school shootings worry parents more than the possibility of big bruins on the prowl.

The 4-2 vote by the Park County School District No. 6 board in the town of Cody near Yellowstone National Park came after more than six months of discussion and debate. Under the proposed policy, school employees would need to have at least 24 hours of initial firearms training and annual recertification to carry concealed guns at school.

“Unfortunately we have people in our country who want to cause harm to students and at some point you have to respond to that threat. And that’s what this board decided to do with the policy they adopted,” said Superintendent Ray Schulte.

The policy was up for a final vote after passing two earlier votes 5-2.

“I think people are really entrenched,” said Yancy Bonner, an opponent of arming teachers who said she may remove her fifth-grade daughter from the school district.

In January 2017, DeVos said during her confirmation hearings that elementary school teachers in Wapiti, a small community about a half-hour drive from Cody where DeVos’ family owns land, might already be armed against grizzlies.

They weren’t — and the remark drew widespread ridicule despite being rooted in a measure of fact. Grizzlies descend from the Absaroka Range into Wapiti and other areas near Cody in search of habitat and food. A tall fence surrounds the Wapiti school grounds to keep bears out.

DeVos’ comments did not come up during Tuesday night’s discussion, according to a reporter for The Cody Enterprise.

“It doesn’t have anything to do with grizzly bears,” Schulte said. “It has to do with the Wyoming Legislature.”

The Wyoming Legislature, which passes gun-friendly legislation almost every year, passed a bill in 2017 letting school districts decide whether to allow teachers and other employees to carry concealed weapons. Republican Gov. Matt Mead signed the bill into law and schools in the city of Evanston in March become Wyoming’s first to allow armed teachers.

Tuesday’s vote happened in Park County, which has one of the biggest gun museums in the U.S. and plenty of hunters, outfitters, ranchers and libertarians who like guns.

“We have a right to conceal carry in this state. And I think people should exercise their rights,” said Rachel Rodriguez-Williams, a former California police officer with two children attending a private school in Cody. “Whether it’s Walmart or a school building, if you conceal carry you conceal carry — you have a permit to do so.”

The policy passed Tuesday night does not allow all concealed carry permit holders to bring weapons onto school grounds.

“The board here kept very tight control of the process and they’re not just extending this authorization to carry to just anybody,” Schulte said. “There are all kinds of requirements people have to meet, and only if they meet them would they be approved to carry a weapon on school property.”

Proponents of guns for teachers in schools say it can take too long for police or sheriff’s deputies to respond to a shooter or any other disturbance at a rural school.

“But regardless of distance or the police response, if you have somebody there that’s willing to stop a lethal threat using lethal means, then that’s great,” said Rodriguez-Williams.

Bonner said she’s not opposed to allowing guns in remote schools, but worries that teachers shooting back at perceived threats could do more harm than good.

“I’m not anti-gun. I mean, we hunt — my whole family hunts. We have guns in our house. I just feel that there are better ways to keep our teachers safe,” Bonner said.

Another Wyoming school district about 25 miles (40 kilometers) from Cody in the city of Powell voted recently to study a range of possible new safety measures up to and including arming teachers. But firearms for teachers are not the main focus, said Superintendent Jay Curtis.

“They’re not off the table at this point, but I don’t think anyone in Powell — at least not on the board or the administration — believes concealed carry is the answer,” Curtis said.