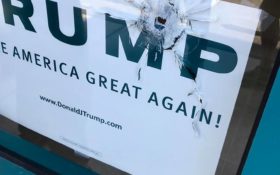 At least four bullets were fired into the windows of Volusia County’s Republican Party headquarters on Sunday night or early Monday morning, police say. Republican leaders say it was a political motiviated attack.

Authorities explained that on Monday morning, a worker noticed bullet holes in windows and contacted the police.

“I’m looking at the busted window that some nice Democrat did,” said Republican Party Chairman Tony Ledbetter on Monday. “Republicans don’t have any beef about what we are doing, it’s the Democrats.”

According to Ledbetter, when workers left the building at 4pm on Sunday, “everything was OK.” When they returned at 9am on Monday, a window had been shot out.

The chairman explained that he believes it was “more than likely a drive-by shooting.” He added, that the person who did this was “sick” and most likely a Democrat.

South Daytona Police Capt. Mark Cheatham said Monday “The bullets entered low and then went high inside the office making us think they were fired from a car, but it’s something we are looking at,” adding that his agency will most likely be the only one investigating the shooting.

Ledbetter explained that their office is located in a strip mall, and that the Republican headquarters was the only office targeted.

“It’s a small strip center and no other business was vandalized, so it was obviously politically motivated,” Ledbetter said.

Republican Party of Florida Chairman Blaise Ingoglia responded to the shooting on Monday afternoon saying, the party “stand[s] against any type of violence against any volunteer, Republican or Democrat.”

He added, “People should have the right to exercise their right of free speech without fear of retaliation.”