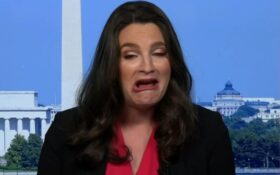 President Joe Biden has seen his approval ratings crater across the last year. Now, even some former members of the administration have turned on the president.

For example, security researcher Nina Jankowitz once served as the head of Homeland Security’s Disinformation Governance Board, but she resigned in May amid a bipartisan backlash.

On Sunday, she broke her silence about resigning from the Biden administration… and she faults the administration for failing to defend her.

Jankowicz spoke to CNN’s Brian Stelter, and she Homeland’s Security’s decision to pause the Disinformation Board’s operations in May.

“[The board] was absolutely the victim of disinformation: all the narratives that the disinformation board was going to be a Ministry of Truth,” Jankowicz said, referring to the state-run media from George Orwell’s novel 1984.

Conservatives worried about not only freedom of speech, but also about Jankowicz’s spotty record in identifying disinformation.

For one thing, Jankowicz had dismissed stories of Hunter Biden’s laptop as politically motivated falsehoods. She told the Associated Press in October 2020, “We should view it [the Hunter Biden story] as a Trump campaign product.”

She described herself on Twitter as “the Mary Poppins of disinformation.” Conservatives nicknamed her “Scary Poppins.”

On CNN, Jankowicz continued, “The Disinformation Governance Board was a body that was meant to advise the many parts of the Department of Homeland Security that were working on disinformation, to bring best practices to bear, and to make sure that we were up with the latest research, the latest trends in disinformation and countering it… in a way that protected freedom of speech, protected civil rights, civil liberties and privacy.”

The term “disinformation” refers to falsehoods that are spread knowingly, as opposed to misinformation, which spreads without any intention of lying.

“Yeah! I have a lot of misgivings about the way things went down,” Jankowicz responded.

“There was a disproportionate focus on me given my level of power within the department. I was not allowed to speak on my own behalf, and frankly, all the communications decisions that were being made about how to talk about the board were made above my pay grade and above my level of decision-making. I was the executive director, but there were a lot of people that were involved that didn’t take advice, frankly, that I had given them, and I had hoped that things would go down different.”

Stelter took issue with the board’s dystopian name, and he questioned the Biden administration’s competence in public relations.

“That was one of the reasons that I ended up making the choices to resign,” she said.

“I felt like the government had just rolled over to the critics who had completely spun this narrative out of control based on absolutely nothing in reality, and the fact that they weren’t able to defend me: the person that they had chosen, the expert that they had chosen to lead this board and safeguard this work. It just didn’t feel like it was worth it, especially given the fact that my family was receiving threats.”

Earlier this year, Jankowicz welcomed a child, and she released a book about online harassment.

Nina Jankowicz was on Stelter’s CNN show & he didn't bring up one single example of her pushing falsehoods. Nina trashed the motivations of her critics & claimed that “I did not post disinformation” & denied spreading disinfo in tweets on 2016 & related to Hunter Biden’s laptop. pic.twitter.com/W4YCHy0QQc